On Bonnie’s ordination as a Pastor: 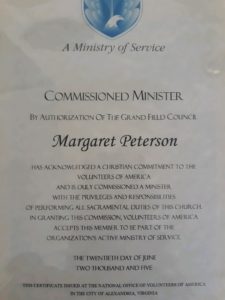 1980 was a bad year for the Peterson family financially. Duane netted $8000 for the year from the car business, and while the family was able to pay their bills and feed the kids, Bonnie and Duane decided that it was time for Bonnie to look for a job.

Nearby was a campus of care, which functioned as a nursing home and also had apartments for assisted living. The previous receptionist was fired for foul language, and Bonnie, being a Christian, was given a one week trial. Well that one week trial turned into a 33 year career. After serving as receptionist, Bonnie was promoted to various positions and eventually became the Director of the Independent Living Apartments and Assisted living.

The Campus of care was sponsored by Volunteers of America, founded by Ballington Booth, a British born American pastor, in 1896. It is notable that he also helped found the Salvation Army, which was later led by his brother.

This not for profit religious organization commissioned people to become ministers. In 2005, Bonnie was approved based upon her transcripts in Bible Studies, as well as her extensive experience leading bible studies in various congregations, to receive such a pastoral commission.

The convention took place in Washington DC that year. Bonnie, accompanied by Duane in a wheelchair (he had recent hip surgery), Beth and David Vawter, made the trip. Bonnie pushed Duane all over DC, visiting many of the sites including notably Arlington Cemetery (somewhat hilly Bonnie recalls). The new group of ministers received their commission at the beautiful and historic National Cathedral, a special moment for all in attendance.

Bonnie used her commission to preside over many funerals over the years, including that of her boss. She almost presided over wedding nuptials on one occasion, but that is another story….